Shiv Mandir Kathgarh is one of the very famous temple in Himachal Pardesh. This temple is devoted to Lord Shiva and Parvati. The temple has a large ‘Shivaling’, which is divided vertically in two parts. The bigger portion of the shivaling is worshipped as Lord Shiva and the smaller portion is worshipped as Parvati. The distance between two parts keeps increasing and decreasing as per changing seasons i.e summer and winter.There is an old temple, built in Mughal style, housing 6 feet long and 5 feet round ‘Shivalinga’ The ‘Linga’ here is of its own kind not found anywhere in the world. The Linga inside the temple is made of wood and it automatically breaks into two pieces and then the two equal pieces are put in the right place and it again retain its original state. 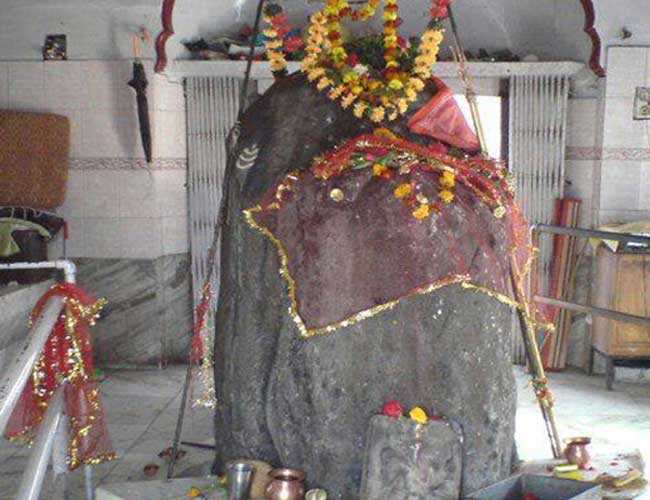 According to a story in “Shiv Purana” there was a war between Lord Vishnu and Lord Brahama as to who is supreme of the two. They were about to use “Pashupat” which would have brought ruin and destruction all around. Lord Shiva could not help seeing all this and he appeared as a fire pillar between the two and both the unatonable Lords became peaceful and wanted know as to what this fire pillar is? Lord Vishnu disguised as ‘Shukara’ went to inquire the bottom and Lord Brahmaas gander flew into the sky to have a look at the top of this fire pillar. Lord Vishnu came back without reaching the farthest point of the pillar in the ground. Lord Brahma came back with a ‘Ketki’ flower saying that it was lying on the top of the pillar. Both the Lords reconciled. Lord Shiva then appeared and was very happy with the devotion and truthfulness of Lord Vishanu and awarded him similarity with self. This great fire pillar came to know as linga of Lord Shiva in Kathgarh Temple.

By Road
Well connected by road from Pathankot , Jalandhar and Hoshiarpur.