Bharmour, formally known as Brahmpura. Bharmour is known for its scenic beauty and for its ancient temples. Some of temples are believed to be existing from 10th century. As the whole country around Bharmour is supposed to belong to lord Shiva, it is popularly spoken of as Shiva Bhumi, abode of lord Shiva. Being the home of an interesting tribe of Gaddis, it is also called Gadderan. 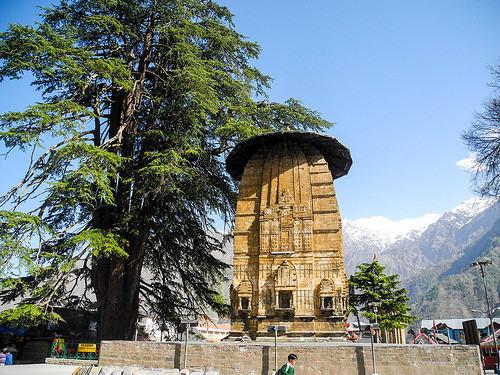 Chaurasi Temple is located in the center of Bharmour town and it holds immense religious importance because of temples built around 1400 years ago. Life of people in Bharmour centres around the temple complex-Chaurasi, named so because of 84 shrines built in the periphery of Chaurasi Temple. Chaurasi is hindi word for number eighty four. The beautiful shikhara style temple of Manimahesh occupies the center of the complex. It is believed that when 84 Siddhas, who had come from kurukshetra, were passing through Bharmour to visit Manimahesh, they fell in love with the calmness of Bharmour and reconciled to meditate here. Chaurasi Temple Complex was built approximately in 7th century, although repairs of many temples have been carried out in later period.

There is another legend associated with Chaurasi temple complex. It is believed that shortly after Sahil Varman’s rise of Brahampura (ancient name of Bharmour), 84 yogis visited this place. They were greatly pleased with the King’s hospitality. As King had no heir, Yogis promised him ten sons. They were requested by the King to stay back in Brahampura till the prediction of Yogis was fulfilled. In due course of time the king was pleased with ten sons and a daughter. Daughter was named Champavati and because of liking of Champavati new capital Chamba was established. It is believed that Chaurasi temple complex in Bharmour was built to honour these 84 Yogis and named Chaurasi after them. There are 84 big and small temples in Chaurasi temple complex. Chaurasi is a spacious level ground in center of Bharmour where the galaxy of temples mostly in the form of Shivlingas exists. The Chaurasi Temple Complex offers a enjoyable, clean and a lovely view.

Manimahesh temple which stands in the centre of Chaurasi temple, is main temple, enshrining a huge Shiva linga. The Shiva linga is nothing but a symbol of characteristic mark of lord Shiva and is worshiped in a symbol. In reality it is identical with the lord almighty which has been described as creator, protector and destroyer of entire universe. While creating this universe he assumes the form of Brahma, while protecting it assumes form of Vishnu and while destroying the form of Rudra.

The temple enshrining Shiva linga resting on the huge square plinth was rebuilt by Raja Sahila Varman during first half of tenth century AD. This monumental temple with high beehive shikhara bearing no sculptures on the outer surface is of middle Pratihara type. It is similar to the early temples of Chamba town and like them has been built on a model of sahila’s lakhshami narayana temple, Chamba town. The repairs of the temples were carried out by Raja Udai Singh (1690-1720 AD).

Deodar – The God-wood at Chaurasi temple

The Chaurasi is partly shaded by huge Cedrus tree, which is visible from great distance away. It grows near the Manimahesh temple. It is regarded as sacred and no branch of it may be cut down. A Cedrus tree looked upon as sacred and is called deodar, the god-wood, if it grows near the Shiva temple. The name, Deodar, goes all the way back to the Indo-Aryan language of Sanksrit where the word devadaru comes from combining deva (god) and daru (wood).There are many stories associated with association of deodar and Lord Shiva. It is believed that this tree is dear to Shiva because he planted his linga on earth in the vicinity of deodar forest on first instance.

Another reference in that Hindu mythology mentions that the formidable Lord Shiva was meditating under a deodar tree, when Kamadeva, the god of love disturbed him. Angered, Shiva opened his third eye and burnt Kamadeva to cinders. Through this legend, the deodar has remained closely connected with the worship of Shiva in Himalayas. Often a tree is built near or around a special tree which is regarded as his embodiment. The Linga Purana also mentions the visit of Shiva in Bhikshatana form to Deodar Forest to entice the wives of sages, who had taken up habits detrimental to the perpetuation of a healthy social order If a Cedrus tree is found in the close proximity of the Devi temple then it is called devidaar. There are many instances of huge cedrus trees growing near Shiva and Devi temple. The temple of Manimahesh Shiva is located near Deodar at centre of Chaurasi temple.

The life size metal bull Nandi, locally known as Nandigan with the broken ear and tail can be seen standing in a modern shed in front of Manimahesh temple. Nandi is chief of Ganas and Shiva’s foremost attendant, who had shape of the bull anf qualities of noble devotee. Usually in front of Shiva temples the shilpa texts provide for a couchant bull paced outside and staring at his lord Shiva. But here we have a life size Nandi bull standing on all fours (legs). Visnudharmotra purana, however describes of such Nandi bull, as representing solidity and stability of dharma. 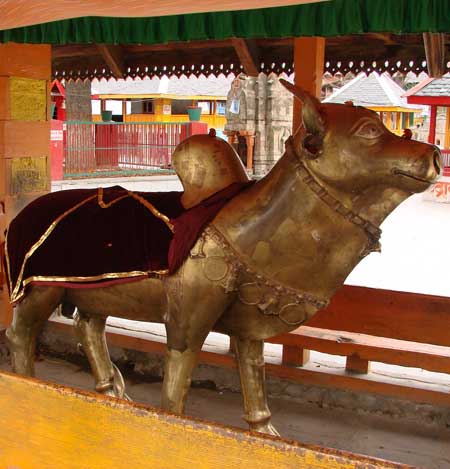 By Train
The Nearest Railway station is Pathankot (150 km).

By Air
The Nearest Airport is Gaggal around 150 k.m. from Bharmour.