The Kangra Fort was built by the royal Rajput family of Kangra (the Katoch family), which traces its origins to the ancient Trigarta Kingdom, mentioned in the Mahabharata epic. It is the largest fort in the Himalayas and perhaps the oldest dated fort in India. 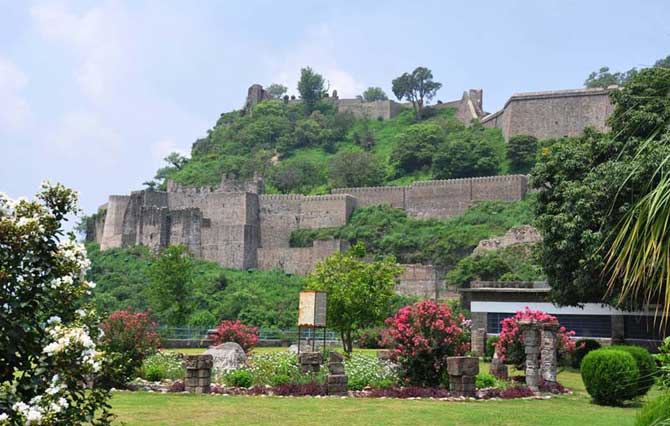 The fort of Kangra was taken by the Mahmud of Ghazni in AD 1009. In 1337, it was captured by Muhammad bin Tughluq and again in 1351 by his successor, Firuz Shah Tughluq. But it was not completely subdued until 1622, when after a siege of fourteen months, it was conquered by the Mughal Emperor Jahangir who garrisoned it with his troops and appointed a Governor to keep the turbulent hill chiefs in check.

In the second half of 18th Century, following the decline of Mughal power, Raja Sansar Chand-II succeeded in recovering the ancient fort of his ancestors, in 1789. But by carrying his ambitions too far he came in conflict with the neighbor hill chiefs, the Gurkhas.In 1804, crossing the Gadwall finally in 1805 Nepalese army conquered Kangda valley across the Sutlej River after continuous fighting for three years. Till 1809 Napali Army conquered Kangra Fort. Subsequently in 1809 Nepali army was defeated and they had to retreat across Sutlej River. Concurrently as British East India Company was also in their expansion spree of colonization advanced up to Nepal’s the then border. Finally, with Maharaja of Punjab, Ranjit Singh was the conquerer of Kangra Fort in 1809. It remained in the hands of the Sikhs till 1846 when it was made over to the British Government, along with the surrounding hills.

A statue claimed to be the earliest of Mahavira in Ambika Mata Temple at top of Kangra Fort. At present the fort is under the control of ‘Archaeological Survey of India’. A British garrison occupied the fort until it was heavily damaged in an earthquake in the year 1905. View from the top of Kangra Fort
Inside the Fort

The fort spreads over a long stretch of land and has high ramparts and walls protecting it. They cover a circuit of around 4 kms.

Darwazas, built by different conquerors, are plenty in this ancient fort. Access to the fort is gained from the Ranjit Singh Darwaza which leads to the Jahangiri Darwaza through the Ahni and Amiri Darwazas. The construction of the last two darwaza was done by the first Mughal governor of Kangra, Nawab Alif Khan. From the Jahangiri Darwaza, a path leads to the next darwaza known as the Andheri Darwaza. From this darwaza, the path divides itself into two. The one leading to the left reaches the Darshani Darwaza, which can be described as the gateway to the most interesting part of the fort. The gate is considered one of the oldest structures in the fort and opens up into a huge courtyard around which a number of chambers are built.

The Lakshmi Narayan Temple and the Sitlamata Temple, that stand at the other end of the Darshani Darwaza are the prime attraction of the fort. Sadly, the earthquake of 1905 has caused much damage to the temples, still both these temples have exquisite carvings to delight you. The ceilings of the Laxmi Narayan Temple is immensely beautiful with its elaborate decorations.

The Mahal and the Tower

Between the Sitlamata Temple and the Ambika Devi Temple, there is a staircase that leads up to the Sheesh Mahal. Though the name, Sheesh Mahal might invoke a picture of a glittering palace in your mind, there is nothing that even faintly resembles the beauty of your imagination. The mahal is a block of stone with a big terrace on the edge of which stands a polygonal watch tower. This watch tower provides spectacular views of the surrounding areas.

The Kangra Fort is approximately 3 kilometer from the town Kangra. Kangra offers wide network of roads

The nearest Railway Station is at kangra and 8 Kms from Kangra Fort.

The nearest Airport is at Gaggal and 12 Kms from Kangra Fort.