Chamunda ,also known as Chamundi, Chamundeshwari and Charchika, is a fearsome side of Devi, the Hindu Divine Mother and one of the seven mother goddesses. She is also one of the chief Yoginis, a group of sixty-four or eighty-one Tantric goddesses, who are attendants of the fighter goddess Durga.

Legend behind the relocation of the Temple 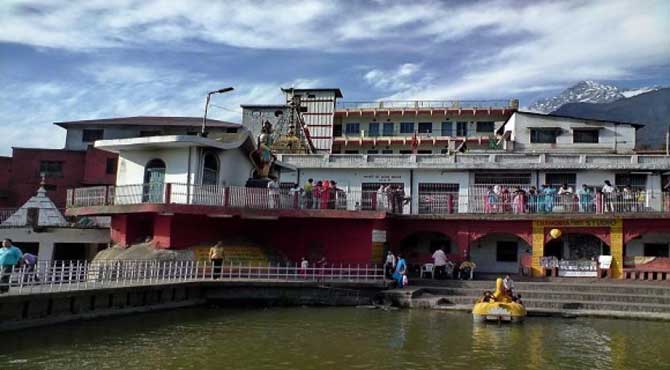 Around 400 years ago, a King and a Brahmin priest prayed to Chamunda Devi asking her consent to shift the image to an permeable location. Chamunda Devi accepted in a dream to the priest granting him the permission. She asked him to Providence a certain area and subsequently, they will find an ancient idol. They can brought the idol in the temple and worship her. The priest told about the dream to the King and sent his men to bring the idol. The men got the idol, but they could not lift it.

Again, the Goddess appeared and asked the priest that the men could not lift the idol because they took it as an ordinary stone. She told the priest to get up early in the morning and take a bath. After wearing fresh clothes, he should go to the place in a devoted manner. The priest did the same what was told to him. He found that he could lift the idol easily. He placed the idol in its present location and from that time, the Goddess is worshipped by people. Chamunda Devi Temple is a eminent holy shrine of the Hindus. This ancient temple dates back to the 16th century. The temple is dedicated to Chamunda Devi, who is a form of Durga / Shakti. Chamunda Devi Mandir is believed to be the abode of ‘Shiva and Shakti’. Due to this reason, it is also known as ‘Chamunda Nandikeshwar Dham’.

Chamunda Devi is considered as the epidemical form of Durga, but at the same time, the Goddess is kind to her true devotees. The term ‘Chamunda’ has been derived from two words, ‘Chanda’ and ‘Munda’. As per the mythological legends, Durga made a goddess with her power, to kill the demons, Chanda and Munda. With her enormous power, the Goddess killed the demons. Goddess Durga became happy with the killing and blessed the goddess that she would be known and worshipped as Chamunda.There is nothing extra-ordinary about the architecture of this temple, but the divine aura spell bounds the devotees with its metaphysical appeal. In the temple, the main image is visible from the main entrance. The main shrine is adored by the images of Lord Bhairav and Lord Hanuman on its sides. In reality, these lords are considered as the guards of the Goddess. The main image of the Goddess is visible draped in rich clothes.

Lord Shiva is said to be one of the complex Gods of the Hindu pantheon, since he is the depredator as well as the renovator. Here, Lord Shiva is believed to have been present in the form of death, ruin and dead bodies. One can also observe paternal worship near the banks of Ban Ganga River. In the environs of this temple, there is a cremation ground that serves to 22 villages of the nearby areas.

The temple is situated in the picturesque beauty of lush green mountains. Many saints can be seen here involved in mortification and meditation.

In winter, the temperature can get quite cold when woolens are required. It is hot in summer and cottons are recommended.

By Air
Nearest Airport is Gaggal which is connected with New Delhi and Chandigarh.

By Road
Chamunda Devi Temple is well connected by road. Chamunda is situated 10 km west of Palampur, 15 km from Dharamsala.