Manimahesh is famous for Manimahesh Lake, Temple of Lord Shiva and the towering Manimahesh Kailash peak. Confess your sins and find eternal bliss of nature at this sacred site situated in the Pir Panjal Range of the heavenly Himalayas.

Manimahesh Lake (also known as Dal Lake, Manimahesh) is a high altitude lake (elevation 4,080 metres (13,390 ft)) situated close to the Manimahesh Kailash Peak in the Pir Panjal Range of the Himalayas, in the Bharmour subdivision of Chamba district of the Indian state of Himachal Pradesh. The religious significance of this lake is next to that of the Lake Manasarovar in Tibet.

The lake is the venue of a highly revered pilgrimage trek undertaken during the month of August/September corresponding to the month of Bhadon according to Hindu calendar, on the eighth day of the New Moon period. It is known as the ‘Manimahesh Yatra’. The Government of Himachal Pradesh has declared it as a state-level pilgrimage.

According to one popular legend, it is believed that Lord Shiva created Manimahesh after he married Goddess Parvati, who is worshipped as Mata Girja. There are many legends narrated linking Lord Shiva and his show of displeasure through acts of avalanches and blizzards that occur in the region.

Legend also mentions that Shiva performed penance on the banks of Manimahesh Lake. In the same vein, it is mentioned that Gaddis, the tribes of this region, adopted Lord Shiva as their deity. Gaddis are the people who reside in the Gaddi Valley which is the name of the upper regions of Ravi River where the Mount Chamba Kailash lies. Further, according to the legend, the Shiva, who lived in Mount Kailash, the highest mountain of the state, gifted the Gaddis with a Chuhali topi (pointed cap), which they wear traditionally along with their other dress of chola (coat) and dora (a long black cord about 10–15 m long). The Gaddis started calling the land of this mountainous region as ‘Shiv Bhumi’ (“Land of Shiva”) and themselves as devotees of Shiva. The legend further states that before Shiva married Parvati at Mansarovar Lake and became the “universal parents of the universe”, Shiva created the Mount Kailash in Himachal Pradesh and made it his abode. He made Gaddis his devotees.

The land where Gaddis lived extended from 15 miles (24 km) west of Bharmaur, upstream of the confluence of Budhil and Ravi rivers, up to Manimahesh. Manimahesh was also considered the abode of the three Lords of the universe namely, Shiva, Vishnu and Brahma. Manimahesh was reckoned as the heaven (Kaliasa) of Lord Shiva. The waterfall seen at the Dhancho on the way to Manimahesh Lake, and which emanates from the lake, was considered as the heaven (Vaikunta) of Vishnu. The heaven of Bramha is cited as a mound overlooking the Bharmaur city.

The Gaddis also believe that Shiva resides in the Mount Kailash for six months, whereafter he moves to the netherworld handing over the reigns to Lord Vishnu. The day he departs to the netherworld is observed by the Gaddis reverentially every year, which is the Janmashtami day, the eighth day of the month of Bhadon (August), the birthday of Lord Krishna (an incarnation of Lord Vishnu). Shiva returned from the netherworld to Bharamaur at the end of February, before the night of his wedding and this day is observed as the Shivratri day; Gaddis observe this also as a festive day since Shiva and Parvati returned to Mount Kailash in the Gaddi land.

Lake and its precincts

Manimahesh Lake is of small size with shallow depth, its location, directly below Manimahesh Kailas peak and several other peaks and dangling glaciers, is an “inspiration even to the least devout pilgrim.”Trekking in the last reach is through the glacier fields of the lake. However, on the way, the walk is through the valley of flowers and wild medicinal herbs up to the lake. The lake is situated at the centre of a snowy field touching the sacred peak. The lake is surrounded by sandy boulders, small hilly mounds and prickly dry bushes, and there is no sign of any grass.

It is called Shiv Chaugan (play ground of Lord Shiva). The lake appears as if it has penetrated the rugged valley. On a clear day the reflection of the abode of Shiva, the Kailash Mountain can be seen on the lake surface. All the year round, the place remains desolate, without any inhabitants, because none dares to stay here. The air is fresh but icy cold. There are almost no fauna in the lake at its precincts – no ants, snakes or any kind of wild life. A few Bird species are sighted rarely. The silence of the place is broken only when the pilgrims visit the place in large numbers, an evening before the holy dip (locally known as naun) in the lake.

Manimahesh is situated at an altitude of 5,656m in the western corner of Himachal Pradesh

By Airport:- Nearest airport is at Gaggal in Kangra (170 kms from Chamba).

By Road:- Manimahesh is From Chamba (78 kms away) by road. Buses, taxis and coaches regularly plying from Chandigarh and Delhi. Chamba is 602 km from Delhi and 392 km from Chandigarh. 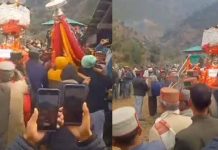 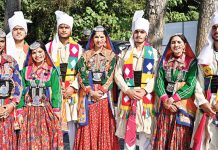 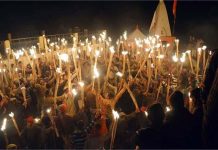 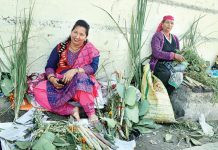 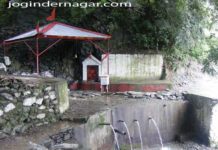