Jakhoo Temple is an ancient temple in Shimla, dedicated to Hindu deity, Hanuman. It is situated on Jakhoo Hill, 2.5 km /1.3 miles east from the Ridge, Shimla at a height of 2,455 m (8,000 feet) above sea level. Shimla’s highest peak offers a panoramic view of the Shivalik Ranges and the town of Sanjauli.

Jakhoo Hill is 2 km from the Ridge, at a height of 2500m. Jakhu Hill is the highest peak in Shimla and offers a beautiful view of the town and of the Himalayas. At the top of the Jakhu Hill, is an old temple of Hanuman, which is also the home of countless playful monkeys. The Hanuman Mandir at the top of Jakhu hill is the highest point in town. This Hanuman Mandir is one of the most favoured spots for tourists and pilgrims. The monkeys around the temple surprisingly do attack people; they however look for food from tourist and pilgrims. It is a steep 45 minute walk to the top of the hill, however for those who are not familiar with hill or mountain climbing it will take more than an hour. On the way to the top of the hill, there are beautiful views of hills, surrounding valleys, huge trees and of course the playful monkeys jumping from one tree to another. The Jakhu Hanuman Mandir is believed to be in existence from the times of Ramayana. The Hanuman Mandir is said to be formed when Hanuman visited Jakhu Hill. According to the local legends, Hanuman visited this place during the famous Rama – Ravana fight. Lakshmana, the younger brother of Rama, was critically injured during the fight with Indrajit, son of Ravana. Only medicinal (Sanjivani Buti) herb can save Lakshmana’s life. Jambavan requested Hanuman to fetch the herb. The herb is only available in the Himalayan range. Hanuman came to Himalayas to search for the herb, but got confused, so as to which was the particular herb. Out of desperation, he uprooted the whole mountain, which contained the herbs and flew to Lanka, where injured Lakshmana with Rama, Sugriva, Vibhishana, Jambavan and others warriors were waiting for him. With just the smell of the herb, Lakshmana and the other warriors became conscious.

On his way back, Hanuman rested on the Jakhu Hills, and the top of the hill got flat by his and mountain’s weight. The place where he sat has been converted into a small temple, where his footprints are preserved till today. The Jakhu Temple has since been highly revered by the locals. The entrance of Hanuman Mandir at Jakhu Hill, inside the temple there are several beautiful painting of various scenes from the Ramayana. Shimla is a must visit hill station while in India. Although there are several places to visit in Shimla, no visit to Shimla will be complete without hiking the Jakhu Hill and a visit to the Hanuman Mandir. 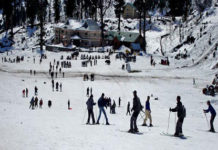 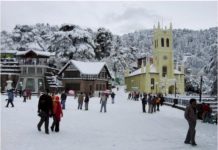 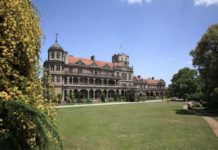