Key Gompa is said to have been founded by Dromtön (Brom-ston, 1008-1064 CE), a pupil of the famous teacher, Atisha, in the 11th century. This may however, refer to a now destroyed Kadampa monastery at the nearby village of Rangrik, which was probably destroyed in the 14th century when the Sakya sect rose to power with Mongol assistance.Key was attacked again by the Mongols during the 17th century, during the reign of the Fifth Dalai Lama, and became a Gelugpa establishment. In 1820 it was sacked again during the wars between Ladakh and Kulu. In 1841 it was severely damaged by the Dogra army under Ghulam Khan and Rahim Khan. Later that same yearsuffered more damage from a Sikh army. In the 1840s it was ravaged by fire and, in 1975, a violent earthquake caused further damage which was repaired with the help of the Archaeological Survey of India and the State Public Works Department.The successive trails of destruction and patch-up jobs have resulted in a haphazard growth of box-like structures, and so the monastery looks like a fort, with temples built on top of one another. 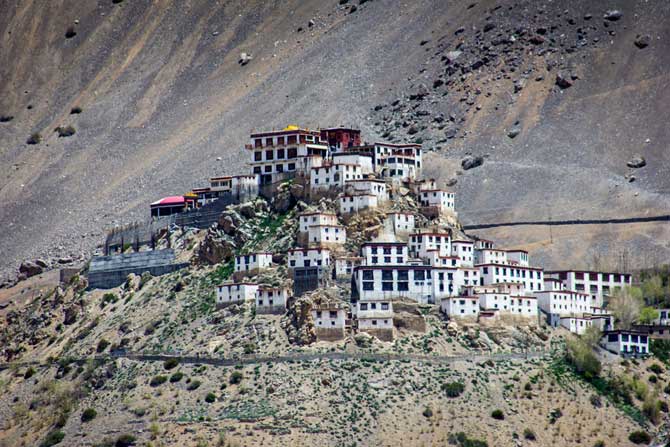 The walls of the monastery are covered with paintings and murals. It is an outstanding example of the 14th century monastic architecture, which developed as the result of the Chinese influence. Key monastery has a collection of ancient murals and books of high aesthetic value and it enshrines Buddha images and idols, in the position of Dhyana. There are three floors, the first one is mainly underground and used for storage. One room, called the Tangyur is richly painted with murals. The ground floor has the beautifully decorated Assembly Hall and cells for many monks.Key Gompa now belongs to the Gelugpa sect, along with Tabo Monastery and Drangtse Monastery, one of three in Spiti.

“The monastery of Kee, for instance, accommodates nearly 250 monks, who reside within the sacred walls in winter, and stay during the summer with their parents or brothers, working in the fields, or employed in carrying travellers’ goods. These monasteries have their regular heads, or abbots, and the higher ecclesiastical titles can only obtained by the candidates proceeding in person to either Shigatzee (Shigatse) or Lhassa (Lhasa).” A celebration of its millennium was conducted in 2000 in the presence of the Dalai Lama.

Spiti valley is a research and cultural centre for Buddhists. Highlights include Ki Monastery and Tabo Monastery, one of the oldest monasteries in the world and a favourite of the Dalai Lama. It was the location of the spectacular scenery and cinematography in the Indian films Paap and Milarepa, a biographical adventure tale about one of Buddhism’s most famous Tibetan saints. The Buddhist monastery in the valley served as the locus of the set and some of the monks appeared in the film.

The Pin Valley of Spiti is home to the few surviving Buchen Lamas of the Nyingmapa sect of Buddhism. The small town of Manali was the beginning of an ancient trade route to Ladakh and, from there, over the Karakoram Pass on to Yarkand and Khotan in the Tarim Basin.

Because of their height, Lahul and Spiti have a very cold climate during winter months. Summer is quite pleasant. This often results in disruptions to electricity and transport, and there is little tourism during the cold winter months. However, the Spiti valley is accessible all year along the Old Hindustan Tibet road from Shimla to Kaza. The Lahul valley is not accessible until June though. however from December to April helicopter services at weekly intervals are available.

The climate of Spiti is too cold to support even tundra vegetation, and much of the land is barren and wild. It is a rare phenomenon to see temperatures rising above 20°C during the summer months, even at the lower elevations.

By Train:
Being a hilly areas and difficult terrain railway is not possible. However narrow gauge line is the only option to reach nearest railway point that is Shimla.

By Air: Nearest Airport is Bhunter near Kullu from Manali side and Jabbar Airport near Shimla from Shimla side.

By Road: Accessible by road from Manali around 115 km on the Manali Leh road, also linked by National Highway No. 22 via Shimla. Buses, and Taxis available from Manali and Shimla. 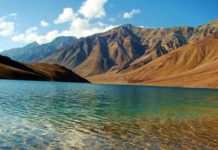