About the origin of the name, ”Sirmour” there are quite a few surmises. One view being that the state derived its name as Sirmour because of the senior position it held amongst the princely hill states. Another version is that at the earliest times the capital of the state was at Sirmour and the state was so called after the name of the capital. But, how the word Sirmour originated is not known.

Sirmour was an independent kingdom in India, founded in 1616 by Raja Rasaloo of Jaisalmer, one of whose ancestors was named Sirmour. It became a part of Greater Nepal, before becoming a princely state in British India, located in the region that is now the Sirmour district of Himachal Pradesh. The state was also known as Nahan, after its main city, Nahan. Sirmur was ruled by the chiefs of Rajput lineage, who used the title “Raja”.

Climate: All the seasons of nature visit Sirmour during the year. Situated in the hot temperature zone the climate of Sirmour ranges from high temperature to sub tropical and snow rarely falls over here.

Rail: Ambala is the nearest Rail head 63 km from Nahan.

Air: Chandigarh is nearest airport which is 87 km from Nahan.

Bus: Nahan is well connected by road. Regular buses and taxis available from Ambala and Chandigarh. 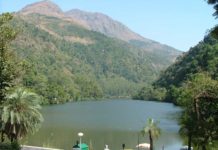